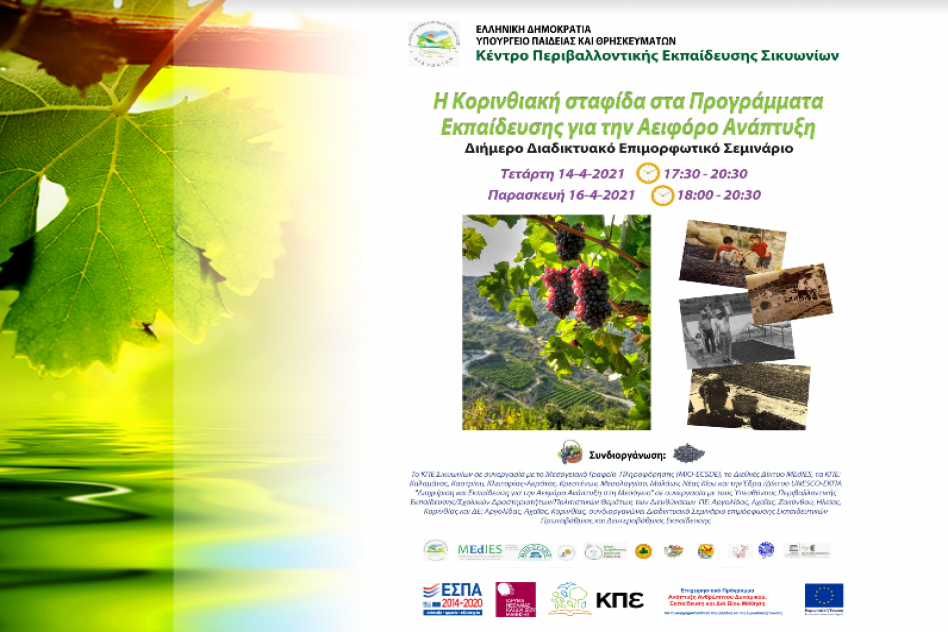 On the 14th and 16th of April 2021, the Center Environmental Education (CEE) of Sikyona in collaboration with MIO-ECSDE and MEdIES alongside with the CEEs of Kalamata, Kastri, Kleitoria-Akrata, Krestena, Messologi, Molaoi and Nea Kios and the UNESCO Chair & Network at the University of Athens, coorganized a two-day Webinar for teachers titled: “The Corinthian raisin in Education for Sustainable Development (ESD) programmes”.

The Webinars were addressed to educators of primary and secondary level of the Regional Directorates of Education of Peloponnese & Western Greece and the Regional Unit of Zakynthos.

On the first day the theoretical approach of the subject was set and on the second day six virtual workshops took place. MEdIES Coordinator, Prof M.Scoullos presented on the first day 14 Apri, introducing the trainees to the overall context of Med.food, and particuarly the vine and raisin within Education for Sustainable Developement (ESD) demonstrating two relative MEdIES/MIO-ECSDE initiatives: the Mediterranean Food Project and the most recent one, SIDUMEF.

In total more than 160 educators participated in both days of the Webinar.

The first day was live streamed via Youtube and has hundreds of views.